Over 140 volunteers have helped us plant a young food forest in an underused area of Haggerston Park. It will build on the many mature plum trees already in the park to create an abundance of fruit to harvest every year. As well as being open to the public to pick fruit from, we will host dedicated harvest days, with the produce distributed to the Sebright Children’s Centre, Sebright School, Toucan Nursery and Morrell Court residential home.

Once mature, the new trees will produce over a tonne and a half of fruit a year, which will be in addition to the vast amount of plums from trees already growing and the crop from edible perennials such as redcurrants, blackberries and grapes.

While the amounts sound substantial, this is still primarily an educational project, with even the many tonnes produced not enough to satisfy Haggerston’s demand for fruit. It will be evidence that food can be grown locally and in cities and that it is a matter of reconcieving the urban spaces as natural assets that can play a part in sustaining us if we take care of them. It is a project that fits in with our ambition to be a healthy food hub as demonstrated through our work with Growing Communities, E5Bakehouse, Frizzante Cafe.

As well as improving our immediate environment, we hope that we will build capacity for orchards, or lone fruit trees to spring up around the city. Our partners, the fantastic London Orchard Project, provided 10 trees and funded training for 5 local people to learn natural orchard management. These people have now become stewards of the orchard, and are drawn from neighbouring communities and they will be running open days to pass on their knowledge.

We also hope that the fruit of our labour will not just be measured in tonnes but also in handshakes, waves and smiles along Goldsmiths Row, Whiston Road, Haggerston, Hackney, and London. Over 60 people helped at our first event and we hope to keep increasing the number of local people involved, giving everybody an opportunity to share, socialise and work together. We hope this will create benefits beyond the confines of the park and strengthen a community to face challenges to come.

The idea for turning a corner of the park into a food production area first came from a member of the park user group, who hoped to used the old derelict depot site. Although this was turned down, we realised that the area next door was already flanked by lots of heavily fruiting plum trees. The project then morphed into a food forest in which new fruit trees would be surrounded by edible perennials which anybody could access. The area of the park was opened up to increase its use, with fences and hedges removed so that people could flow into the park.

Now in its fourth year, the site is abundant with produce and we run sessions on plum jam, ketchup and chutney making.

Email us to volunteer 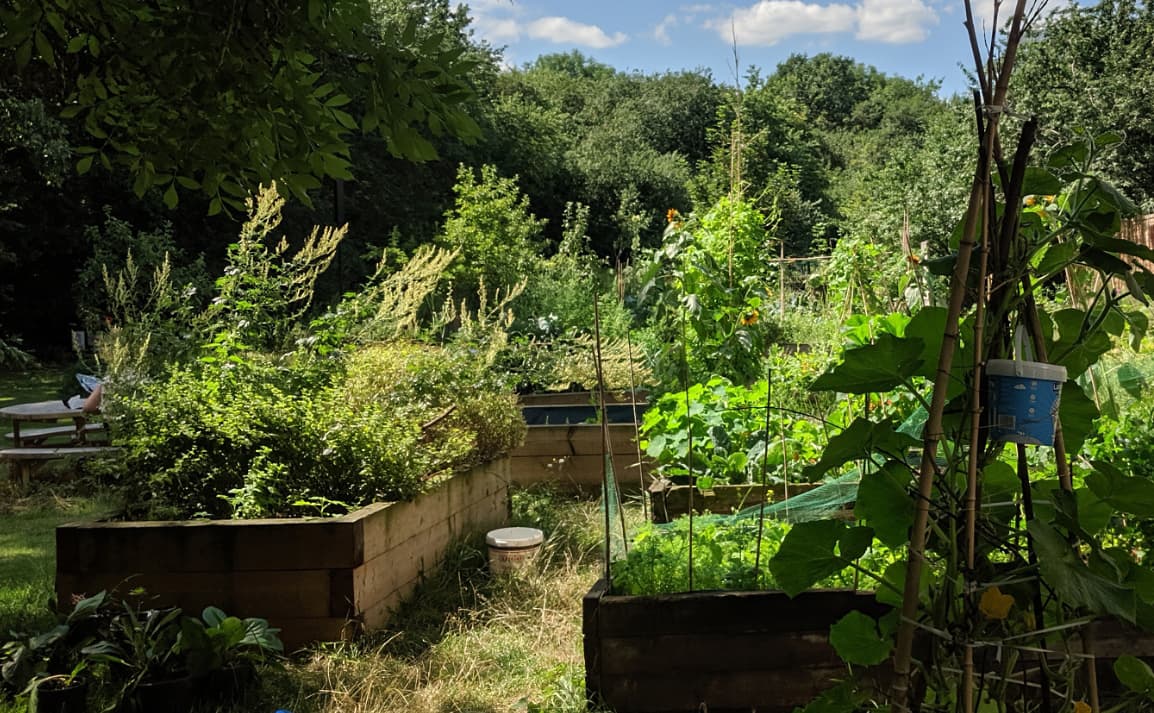 Hackney City Farm
1a Goldsmiths Row
London E2 8QA
Tuesdays to Sundays
10:00–16:30
Closed Mondays except bank holidays
What's onBookingsDonatePrivacyTermsContact
© Hackney City Farm 2021. Registered charity no. 291211
|
Privacy
|
Cookies
|
Contact
|
Website by Doublesided
Top
You are in control of your own cookies
Hackney City Farm use cookies on this site. Some are strictly necessary to run the site but some are optional for measuring how the site is used, marketing and social media.
Manage options Manage third parties Manage vendors Read more about these purposes
Cookie Settingss
{title} {title} {title}